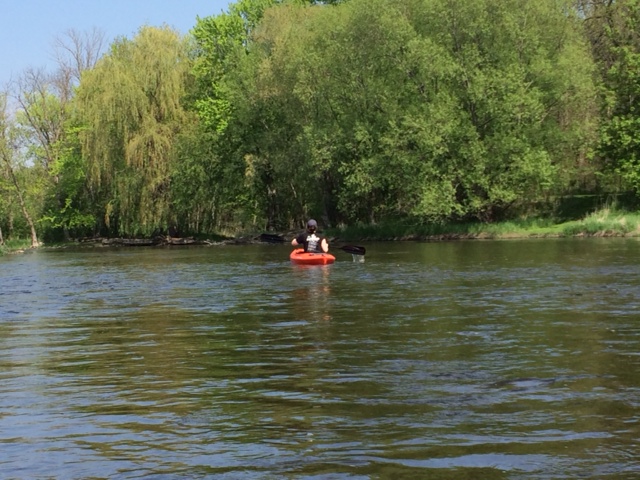 The day started early, with a cloudy sky overhead.  My boyfriend, Mike, and I had come to my home town in Northwestern Illinois the night before.  My mom was already in the

kitchen making sandwiches for our lunch on the river, with coffee brewing behind her.  She immediately put us to work on getting everything ready to go.  We were going to drive up to the Milwaukee River in Kewaskum, WI (just north of Milwaukee) to kayak.  My mom and dad invited us to join them on this day trip a couple of weeks earlier and we gladly accepted.  We left the house at about 8:00am and arrived in Kewaskum close to 10:00am.  It rained the whole way up but by the time we got there, the sun was shining.  We dropped off bikes at our end point so Mike and my dad could ride and get the car when we were done, and drove up to the start of our kayak journey.  We launched the kayaks right after a dam in the river, with our lunch, water and extra clothes packed into the back compartments.  A few fisherman saw us off as we started paddling down

river.  We didn’t see many other people for the rest of the 9 mile excursion.  The river was still and shallow, and reflected the green, freshly-leafed trees that hung over it.  We were all silent as we glided through the water, taking in the scenery.  We passed through a golf course, which we were reminded of frequently as we passed random golf balls nestled into the sandy bottom of the river for the rest of the trip (my dad had about two dozen of them rattling around in his kayak by the time we reached the end).  It was a perfect day to be out on the river; the weather was warm and the sun was out.  The trees 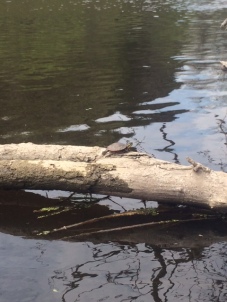 offered shade when we needed it, and it was too early in the year for there to be many mosquitos buzzing about.  We spotted a multitude of wildlife, including turtles, frogs, fish, assorted waterfowl and other feathered friends, deer, and a snapping turtle the size of a car tire (you’ll have to take my word for it because I was too scared to get close enough to take a picture).  We stopped a little less than halfway through to have lunch on the muddy, rock-laden shore, propping our kayaks up on the mud to make them stay put.  We had our picnic lunch, sitting on the rocks.  After lunch, we got back in out kayaks and took off again, only to come upon a “strainer”.  This means that the river was blocked by fallen trees, branches and debris, and in this case it was completely blocked.  We had to pull our kayaks out of the water and across a patch of tree branches and old, rusty barbed wire to put them back in, past the blockage.  Once we hit our stride again, we hit another strainer, though this one allowed us through a small opening between fallen trees.  It required some fancy maneuvering but we all got through without too much effort.  Soon after we went through the strainer, we passed the most picturesque farm right on the river.

The red barn was reflected beautifully in the water, and was open on one side so we could see the cows it housed.  At one point, the current became stronger, and it was just as we came upon a fork in the river; which we later found out was more of an island.  The current led me right into one side of the shore, which resulted in me getting stuck on the rocks there.  Mike pulled me out, but in a way that had me getting pulled 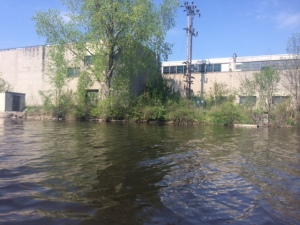 swiftly backwards on the current towards I didn’t know what.  It was an exhilarating task to try and right myself before we reached the upcoming bridge, which I did, clumsily.  After the bridge, the river became quite shallow, and we all got stuck on the rocks a few times.  Towards the end of our journey, we saw an abandoned factory fit for a horror movie set, which contrasted sharply with the peacefulness of the river.  We passed it and imagined the plots that could take place there.  We took our kayaks out just before another dam, and Mike and my dad rode off on the bikes to get the car.  My mom and I unloaded the kayaks and brought everything over towards the parking lot to load into the car.  We sat down to wait and had a good talk, taking in the sunshine and
enjoying each other’s company.  Once the car was loaded, we drove off to Cedarburg, WI for dinner.  Cedarburg is quite possibly the cutest town in

Wisconsin, I’m almost sure of it. It is right on the river, and its main drag is lined with cute shops, restaurants, wine bars and a beautiful City Hall across from an equally beautiful church.  We landed at Morton’s Wisconsin Restaurant for dinner, and it was the best place to end out beautiful day.  It was the quintessential Wisconsin bar/restaurant with the specials written on w wipe-off board and the walls covered in booze signs and posters.  We were all starving from our kayak adventure, so we got burgers and beer.  I ordered a Spotted Cow, which is an excellent ale by New Glarus Brewing, which is only available in Wisconsin (totally worth the trip in itself).  The food was delicious and just what we needed.  We took the long way back to the car so we could stroll along the river a little more.  Cedarburg definitely deserves its own trip, which I will have to plan soon.  Once we were on our way home, I passed out against the car window.  The day was absolutely perfect, between the gorgeous weather, the amazing company, and the serene scenery, I wouldn’t change a thing.