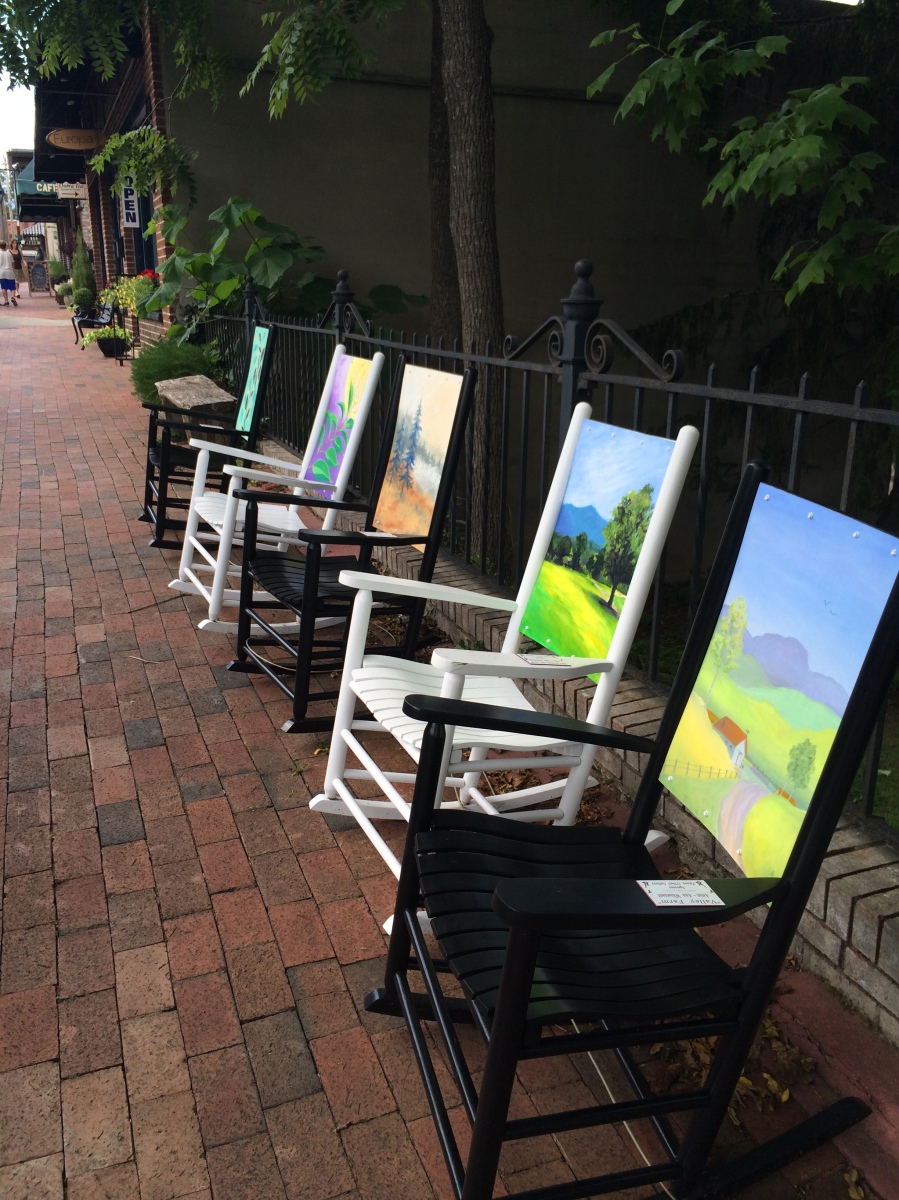 Life is Better on the Lake

We go to Maiden Lake in Wisconsin every year for Independence Day, it’s a family tradition (as per my previous Lakewood, WI post).  This year, I drove up with my boyfriend straight from Chicago, which was a first.  We left at 6:30am on Friday, stopping for coffee first and then we were on our way.  It was an easy five hour jaunt up through Milwaukee, Green Bay and straight on to Lakewood.  We arrived just before noon and got ready to go on the boat

right away.  It was a perfect day to go out on the lake, warm enough to make you want to jump in the water but with a perfect breeze.  We cruised around for a bit and then stopped for cocktails and snacks, which were stored in the coolers.  It was a perfect afternoon of lounging out on the water.  After snacks, I was talked into trying to water-ski, which was a painful failure.  If I didn’t get a mouthful of lake water getting pulled directly out 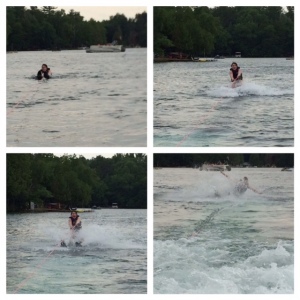 of the skis, I was flying backwards with the skis pulling my legs out to the sides.  I did manage to get up halfway on the skis once, but I got so excited that I flung my hands up in the air, effectively letting go of the rope.  I called it quits after that and we headed back to the cabin to tie up the boat and get ready for dinner.  There are a lot of great restaurants and supper clubs around Lakewood, but because of the holiday weekend and the size of our group, it’s usually easier to make dinner at home.  The end result is always delicious, and enjoyed on the porch in good company.  After dinner a few of us walked from the cabin to the Maiden Lake Supper Club to enjoy a drink al fresco on their deck by the lake.  The Supper Club is a Maiden Lake institution and is really the only the restaurant that’s actually on the lake.

There is always a wait to enjoy their large portioned, comfort foods and seating in the bar and on the deck is always limited.  Luckily, we were able to get a table and enjoy the sun setting over the lake.  On our walk back, we admired the other cabins along the lake.  Some were

newly built, and some maintained their rustic charm.  My favorite had a small red box on a post with the title Maiden Lake Library on it out front.  Its front window displayed an array of books, with take one leave one written under the shelves.  We came home to a giant bonfire behind the house primed and ready for s’mores making.  It was a perfect ending to our first day at the lake.  The next day was July 4th, and I woke up early to paddle-board before the bigger boats came out.  It is the most peaceful thing to be out in the middle of the perfectly-still lake on the paddle-board.  After I got my fill of inner peace, we started our Independence Day celebrations early with a huge breakfast.  The best part of

lake life is that everything revolves around when we can get out on the boat.  While half of us cleaned up from breakfast, the rest of our group readied the boats to take them out for the day.  We set shortly after, split between two boats.  I tried to ski again, and this time I was finally successful!  I got up for a while and was satisfied enough to quit while I was ahead.  The boats met up to anchor and so we could swim and sip cocktails in the sunshine.  When we docked for the day, my boyfriend and I went to the grocery store for burger fixins and then drove down the road to Sweet Memories, an amazing candy store in Lakewood.

We raided the Jelly Belly room and headed back to the cabin to help with dinner.  It was burgers, brats and homemade fries for supper and then down to the lake to watch the 4th of July Boat Parade.  I watched it from the front row, sitting in a kayak a little ways from shore.  The theme this year was Disney, and the 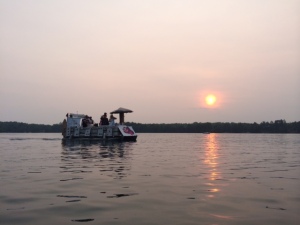 contestants did not disappoint.  There were Minions, Pirates, Winnie the Pooh, and even Snow White and her seven buddies showed up for the occasion.  The next holiday festivity was our annual trip to the best ice cream stop in the Midwest, Northern D’Lites.  They have delicious soft serve in an ever changing cycle of flavors and all the usual suspects as far 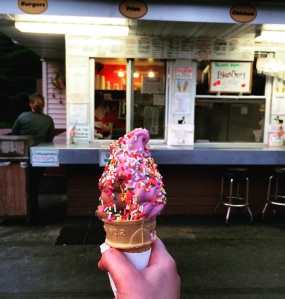 as frozen treats go.  It’s a humble pick-up window surrounded by picnic tables, complete with friendly staff and a long line of customers.  After our collective sweet tooth was satiated, we drove off to find parking for the fireworks show, which we watched in the back of my uncle’s pick-up truck.  The fireworks display is always great, and this year it was the same.  However, the

next day, we were assured by one of the grocery store clerks at True Value that this year was a little lean because next year is the town’s centennial, which they will go all out for.  Our last day at the Cabin, my boyfriend and I spent the morning Kayaking to one of the beautiful inlets on the south side of Maiden Lake.  Our whole crew had one last spin around the lake in the speed boats and one last swim before we put away all of the boating gear, took the boats out of the water, and closed up the cabin.  It’s always sad leaving, but hopefully we’ll be back sooner rather than later.  On our way home, my boyfriend and I stopped at two vastly different but equally important Wisconsin landmarks.  The first was Bagley Rapids in Mountain, WI and the second was Mars Cheese Castle in Kenosha, WI.  Bagley Rapids is a beautiful park and campground in the Nicolet National Forest.

We had to drive down a very narrow, dirt road to get to the parking lot, which was very small and perhaps the wrong parking lot.  However, we finally made it down to the rapids, which we heard before they came into view.  It was a gorgeous scene.  We were able to take a walk along the side of the rapids before we had to get back to the car and continue on home.  We drove for another three hours before reaching Kenosha, the location of the famous Mars Cheese Castle. 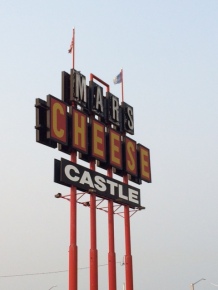 I’ve passed it many times without exiting the highway to visit, but this time we exited route 94 and pulled into the parking lot of the castle.  It is a mecca of cheese, sausage and condiments.  It is also one of the last stops on the highway to pick up some New Glarus beer, which is only available in Wisconsin and so delicious.  I have to say, it was pretty expensive compared to other stops ($3 extra for a 6-pack of Spotted Cow).  We purchased some cheese, sausage and beer regardless of the price and stopped in the restaurant for a bite to eat before finishing the drive to Chicago.  We both had bratwursts, which were very good, but the service was slow and without a smile.  The rest of the drive went smoothly, and soon we were home safe and sound. Before long, I was asleep, dreaming of being back at the lake.

If you are interested in any of the places mentioned, check out these links:
Lodging
Lakewood, WI
Maiden Lake Supper Club
Bagley Rapids
Mars Cheese Castle

3 thoughts on “Life is Better on the Lake”