Some trips hit you on a deeper level than others, spark big ideas, and stay with you forever.  For me, it was a matter of the right opportunity coming at the exact right time.

I traveled to South Korea a little over a year ago.  It was a trip fueled by self-indulgence and a little bit of self-pity.  I had just been passed over for a cross-training opportunity at work and also was just dumped by someone I never had much of a future with anyways.  I needed to get away, and conveniently, my cousin, Katie, was living in Seoul at the time and invited me to visit.  I used my whole tax refund to purchase the round trip ticket, with a little left over for extra expenses.  It felt really good to make the journey to Korea, with a short layover in San Francisco, on my own. The flight was 12 hours from SFO to ICN, and I spent it watching movies and reading the first Game of Thrones book, too excited to sleep.  By the time we landed, I was so exhausted but did my best to keep up with my cousin and her boyfriend, James, who took me out for dinner.

Our first meal included Shabu Shabu, a Korean style hot pot, and bibimbap, a vegetable and rice dish.  By the time we made it back to my cousin’s apartment, I was spent.  We talked a little bit about what I wanted to do while I was there and she showed me the guest room before I passed out.  Katie obviously still went to work while I was there, which allowed for a good balance of having her as my Seoul guide and giving me time to explore on my own.  Most days started with a hike through Namsan Park, which was walking distance away from their apartment. 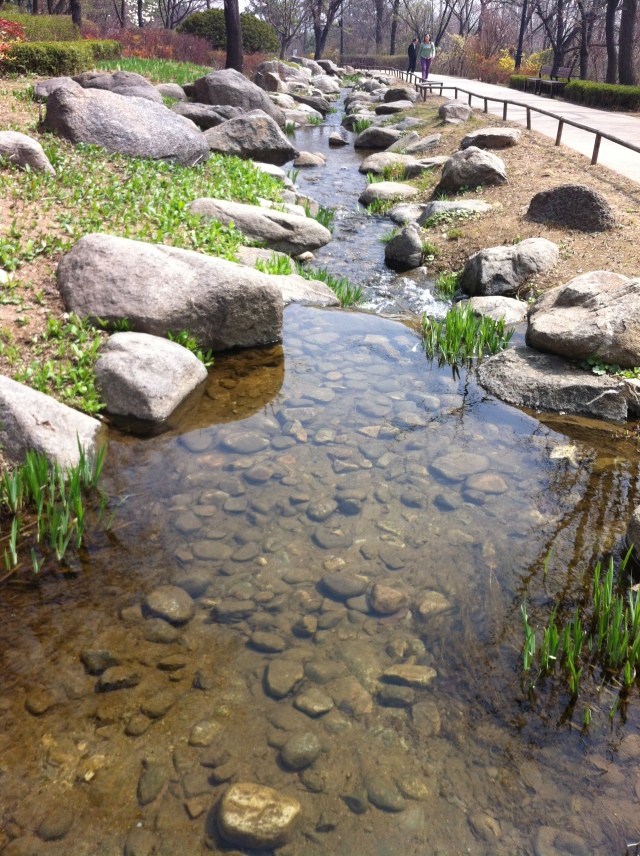 The park was gorgeously maintained and every time I walked through it I tried to go a different way.  The walk up to 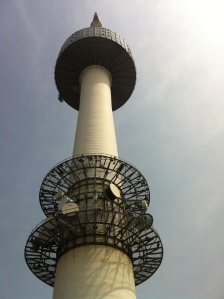 N Seoul Tower, which was located in the park,was a great hike; it was very steep and provided an
excellent work out.  I didn’t go up in the tower itself, but
walked around the plateau it stood on, which featured a memorial, a gift shop, a café, and a beautiful view of the city.  There was also a chain link fence covered in padlocks, known as “Locks of Love”, similar

to the Pont des Arts in Paris.  After my walks, I’d head back to the apartment to meet up with Katie and zip around Seoul on her Vespa.  We browsed the markets, ate street food, and saw the sights.  Not many of the locals spoke English, but I found I could get by with knowing just two Korean words: hello (“annyeonghaseyo”) and thank you (“kamsahamnida”).  I picked up a few more as I went, but a hello and a smile went a long way.  I loved browsing through the markets and haggling with the vendors.  We went to Insadong and Namdaemun markets on one of the first days I was there.  They both had their own unique atmospheres.

Insadong was my favorite, with its great mix of new stores and old goods.  I obsessed over the kitschy t-shirts and the traditional Korean masks, the red bean donuts from the street vendors and shoppers walking around with huge, curly ice cream cones (called Jipangi).  My cousin had lived in Seoul for a while at this point, and knew all the best little restaurants with the most authentic Korean cuisine.  We had Mandu dumplings, Tteokbokki (rice noodles in a spicy red sauce), Korean soups, barbecue, and kimchi, so much kimchi.  Of course my favorite meals were the Korean BBQs.

I loved all the banchan served on the side: the pickles, fish cakes, seaweed, bean sprouts, rice… so many little dishes crowding the table.  The wait for the meat to cook at the table made it taste that much more delicious.  All of that chased down with shots of Soju and glasses of beer mixed with sprite (it sounds weird, but it’s actually very refreshing).  One night, we went out with Katie and her boyfriend’s friends for Korean Barbecue and then out on the town.  Our first bar stop served us a plastic-lined picnic basket filled with ice, fruit and an amazing punch, with extra-long straws poking out.
Needless to say, that started our night off right, and we stayed out until the bars were closing. 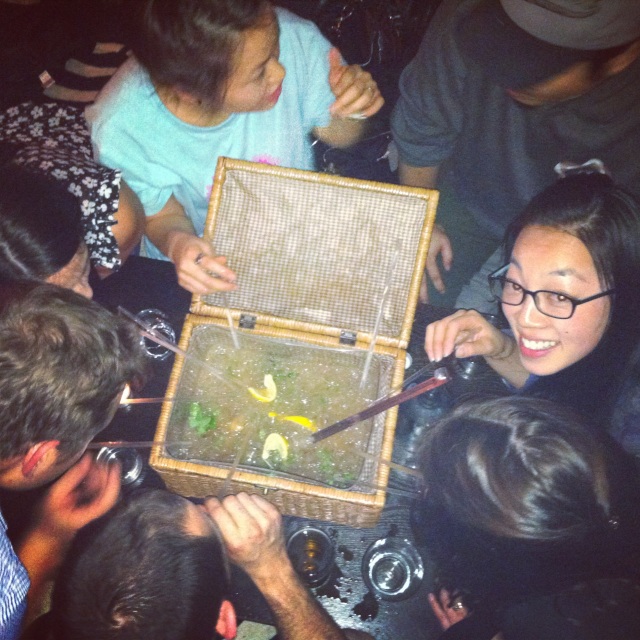 One of my favorite places that Katie took me to was Gyeongbokgung Palace, a beautiful historic site that we wandered through for a full afternoon. 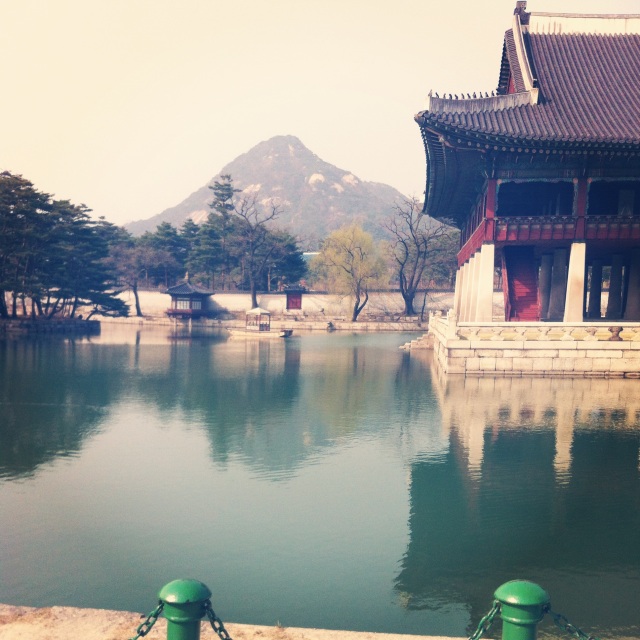 The architecture, koi ponds, and gardens were stunning, and with the addition of the blooming cherry blossoms, it was almost impossible to leave without taking about three thousand pictures.  We also walked to the King Sejong statue, which was very close to Gyeongbokgung Palace.
The beautiful gold statue sits in the center of the Main Plaza and has the view of Bukaksan Mountain behind it. 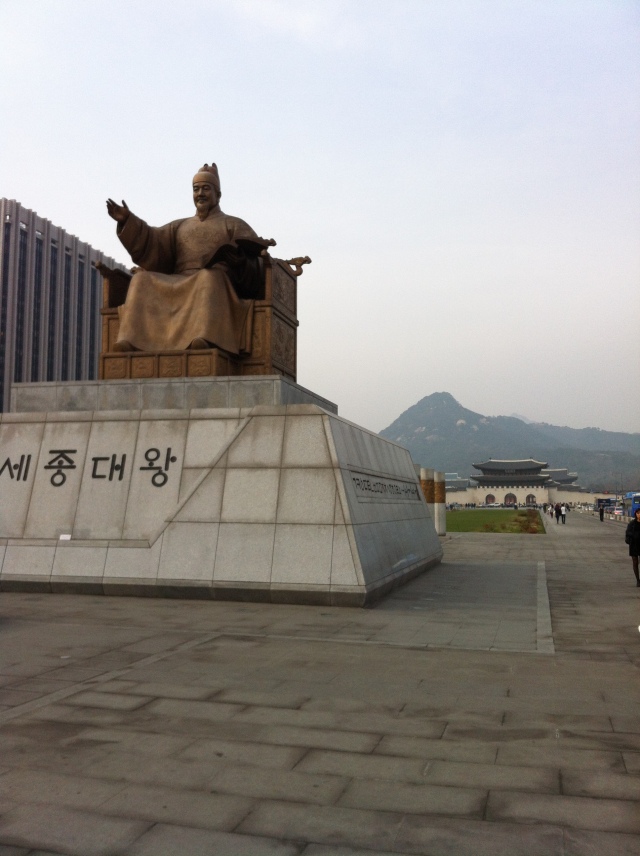 When I had a morning to myself , I took a taxi to Jogyesa Buddhist Temple, with help from a note that Katie wrote in Korean for the driver.  The temple was starting to be decorated for Buddha’s birthday, which is in the beginning of May.  It was absolutely breathtaking.

There were lanterns of every color strung up in the trees to form a canopy over the courtyard.  I listened to the prayers and lit incense, and tried to take in the whole scene.  It was a very humbling experience to be in the presence of something so spiritual.

Afterwards, I met Katie at a traditional Korean tea house for a mug of thick, spiced tea with Korean cookies.  The tea house was atop one of the stores in the market, and looked out on the cherry blossoms right outside the window.

We rode everywhere in Seoul on Katie’s Vespa, which was so exciting and a little scary.  We rode up steep hills in the mountains, and in traffic through the city – everywhere.
It really made the trip that much better to be able to see the city from the back of a scooter, zipping around to wherever Katie wanted to take me next.  Many people use Vespas as their main choice for transportation in Seoul, from businessmen to delivery men.  We did have one scare while we zooming around, when a delivery driver on a scooter slid under the back bumper of a car right in front of us.  The driver was okay, thank goodness, but I definitely wore my helmet a little snugger, and hung onto the scooter a little tighter after that.  That weekend, we, Katie, her fiancé, James, and his daughter, Louie, decided to take a little trip to Nami Island, which was a train and ferry ride away.

The Island, a popular destination thanks to a famous Korean Soap Opera: Winter Sonata, was like a fairytale.  The main walk was lined with white, balloon-shaped lanterns.  There 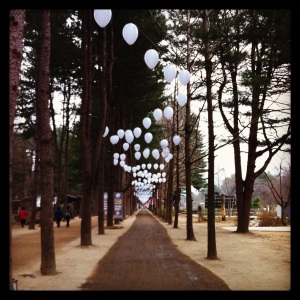 were interesting statues at every turn, and a man in what looked like a smiling potato costume acted as a mascot.  We rode a four person bike-mobile around the island, taking in the scenery.  I had one of my favorite delicacies, a red bean bao…ok, more than one.  The island was only a little crowded, and we spent a good amount of time exploring and looking at everything there was to offer.  They did have accommodations on Nami Island, however, they book pretty far in advance so we 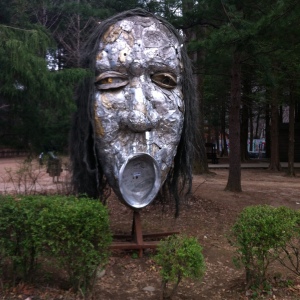 ended up staying elsewhere.  We took the ferry back to the mainland and had a delicious dinner of Dak Galbi, a specialty of the area made with rice cakes, chicken and spicy sauce, then took a taxi to our hotel.  The hotel happened to be in the middle of nowhere, which was weird enough, before you factored in the rave that seemed to be happening next door to the hotel.  It was a long day, we just rolled with it.  We put Louie to sleep in the hotel room, and sat on the porch and drank Cass beer and talked.  It had already been an amazing trip and I still had a few days to go.

We had a pretty low-key day after Nami Island, taking our time getting back to Seoul.  Katie dazzled us with her fabulous Korean cooking skills for dinner.  After dinner, we planned out what else I should do before I returned to Chicago; referring to the Seoul Bucket List I had made in the beginning of the trip that was now mostly crossed off.  On Katie’s suggestion, I took another solo excursion to the National Museum of Korea, where I spent a few hours learning more about the amazing country I had become so fond of.  The museum was very large, and had an outdoor portion with gardens and statues.  I wandered through these and stumbled upon a waterfall full of very vocal frogs, aptly named Dragon Falls. They were so loud, I ended up staying awhile on a bench, just listening.

After exploring the museum, I, again, met up with Katie and we were off to wander around Bukchon Hanok Village, an area of traditional-style houses.  It was a beautiful time warp in the middle of this bustling city.

From there, she very generously allowed me to give in to my shopping addiction and took me to a few cute neighborhoods to browse, including Myeongdong, a hip fashion area. 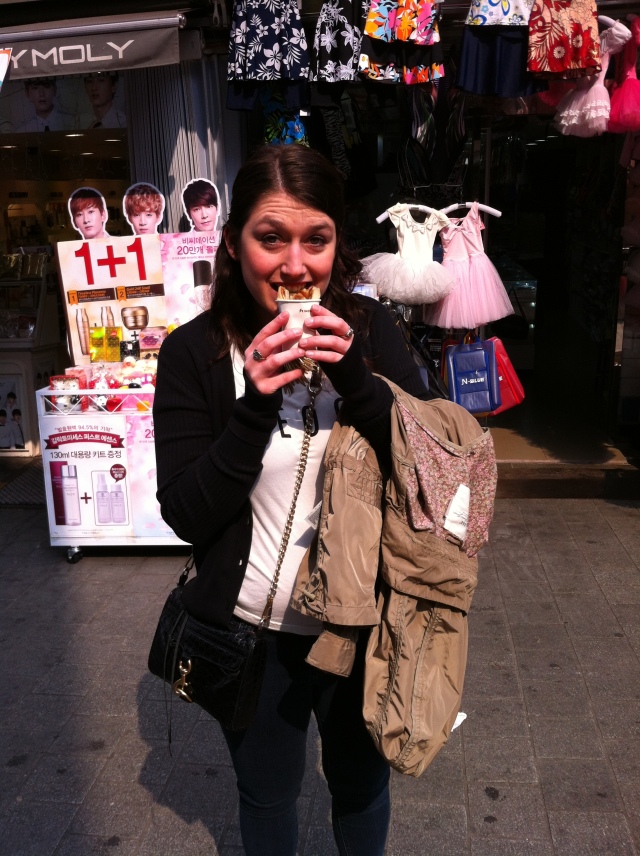 She also had directed me to one of the more famous department stores, Shinsegae, where I fell in love with Korean Fashion and got hopelessly lost in the underground market below.  I walked up and down the aisles, searching

for the exit that would lead me to the corner I was supposed to meet Katie at.  While I wandered, I still shopped, of course, and marveled at the interesting, bargain fashions.  I finally made it out, and found my cousin.  It was a moment equivalent to a toddler finding their “lost” mom in a supermarket.  I was so happy to see her.

Earlier on in my trip, Katie had introduced me to her friend and mentor, Okjung, who is a Korean writer.   The first time we met, the three of us shared grilled

mackerel and went out for a beer on Hongdae, a popular club-y neighborhood in Seoul.  On one of my last evenings in Seoul, Okjung invited us to her apartment for a home-cooked meal.  She made us Pajeon (scallion pancakes) and other delicacies, and we talked about Korea, writing, and life in general.  We had a lovely time with Okjung and her husband, and I’m happy to have had the opportunity meet them.  On my last day in Seoul, Katie and I rode a tandem bike along the Han River in Hangang Park.  I didn’t want to leave.  I enjoyed everything about this trip: the people I met, all the food, shopping, sights…everything.  Seoul inspired me.  In a way, Korea is the reason I started this blog.  The first picture I posted on RebeccaWanderlusting is me at Gyeongbokgung Palace.  Seoul gave me some soul, and led me to this amazing adventure I’m living now.

***Big, Big THANK YOU to Katie and James for housing me and being amazing tour guides.  Your local expertise made this trip so much more than simple tourism.  I love you both!

8 thoughts on “Korea has Seoul”